Bogan Hunters has hit the TV screens of Australia featuring the official theme song by Heaven The Axe. Check it out in the clip above.

You can watch the short version of the clip here on Yahoo7 with the episodes of Bogan Hunters as they air. 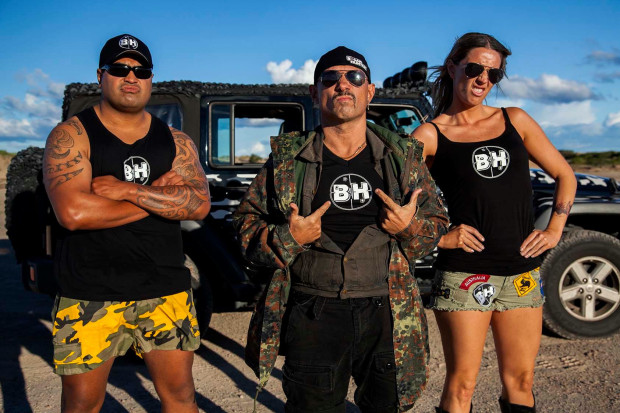 INTERVIEW:
So Phoebe, what inspired you to be able to write the lyrics to the Bogan Hunters Theme song?
Its a really very deep and profound song, whereby digging deep into lots of personal experience and observations by the native fauna surrounding me, allowed one to be able to call forth the essence of the inspiration behind these lyrics.
A lot of my own emotional layers had to be stripped and peeled right back, to connect with my inner bogan (some say…more outer but I dont know, ay…geez) myself, so I could share that with the nation..spiritually and connect with people in the place where they too are fond of their bogan-ness.
Steve smashed together some wicked riffs, as he does, just tralala and there they are….the boys had a BBQ and a piss up (several) pulling together all the elements (well, we are truly Aussies…what would the Bogan Hunters song be without writing it further at a BBQ let me ask!! Its very totes cray vogue…) and then the lyrics came together to really capture the essence of “Proud Aussie Bogan” or its native latin title “Boganaustralisapian”
as well as honoring the exceptionally skilled and revered Hunters.

Its a modern day Australian National Anthem really…am I being too humble? Oh…I dont know….

I really wanted the chorus to sum up the intrinsic nature of this wonderous wild and untamed creature that sets it above all other native species as a national treasure. The chorus I feel, if I do say so myself, really captures the magic of the
Legend of the Boganus…

“This Aussie heart and soul, we have evolved to this, so grab your mull and bowl and lets get on this p!ss
– Bogan Hunters – Oi! Oi! Oi!”

I did a lot of headmiles in my journey to develop this.
The simple things in life are often the best BUT only appreciated after kilometres of headmiles. We got there…PHEE-EW!

If the song were an oil painting entered into the Archibald Portrait Prize as a depiction of an Australian Bogan, then it would be a good contender for a high award, I think… capturing the true essence of  the bogan beast.

In actual fact what I’m most proud of is utilising the (now) words
“Boganaustraliasapian” and “procrasterbation” in the same song.
I gave myself a two finger clap for pulling that off. And rhyming Hunters with munted.
Just close enough that you dont notice….!!! Ah look at me tooting my own horn!!! Must chooff off now….But in conclusion…

Bogans have feelings too.

…And Bogan-chic is the fashion statement of the century!

I was told by a budgie smuggler that the song is currently the ringtone for the Prime Minister Tony Abbott. He loves a good listen to the Bogan Hunters anthem, listening to it for long periods as I believe he screens a lot of calls in case of being strongly pursued by love interests, repeatedly, everyday. Its also enjoyable for a brief moment whilst being called by those pesky central bank debt collectors. I hate private numbers too …argh.
But its really something as a songwriter you know? To serve your country in such a way…Yes.
We at Heaven The Axe are very proud to be of service. 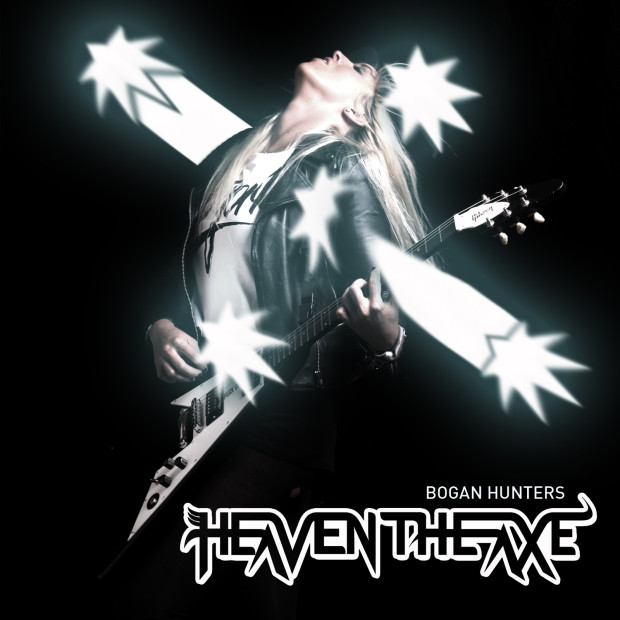 Were hunting a species of this land
“Boganaustralisapian”
Some think that they’re insane
Think they don’t have a brain
Call the bogan hunters!
Theres so much these super hunters do
No one knows how and they don’t too
They hear you cry in vain
They’re here to rattle your cage
These Bogan Hunters!

So what will our heroes find today?
They’re on the hunt; they’re on their way
To go where eagles dare
Inside the bogans lair
Ooh theyre coming to get you
Think twice ‘fore you play your Angus Young
The native call; the bogan song
Or rev your V8 loud
Youll be the target in the crowd
For the bogan hunters!