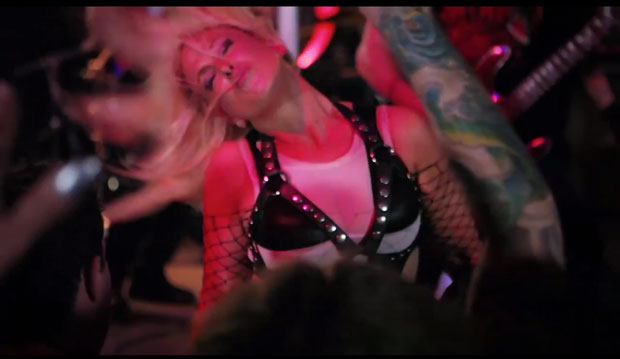 HEAVEN THE AXE performed at brand new world class multi-level venue Level 2 in the heart of Northcote on Sat Oct 13 to premiere the debut film clip for track 1 “Enemy” off “Sex, Chugs & Rock ‘N’ Roll”. Inviting 4Arm (who are back in Australia after playing at Download Festival and about to head back to the UK to perform at Hellfest), Bugdust and Chinatown Angels, the clip, directed by Thanassi Panagiotaras took over 1 year to make with a cast of over 200 actors, extras, crew and contributors.

“We are very passionate about the injustices and hypocrisy of the systems that govern us within our musical inspiration, and while each and every one of us battles with the Enemy within, we wanted to make a clip that our fans would relate to as there is increasing evidence in the world about the corrupt system, the rules that confine us and the exposure to the evidence that those in power and control are not always operating from a point of integrity” – Phoebe

What’s your Enemy? Respond to Phoebe on twitter @heaventheaxe

HEAVEN THE AXE would like to acknowledge the following contributors for without their contributions this clip would not have been possible:

All the fans and friends who came to be part of the extras scenes.