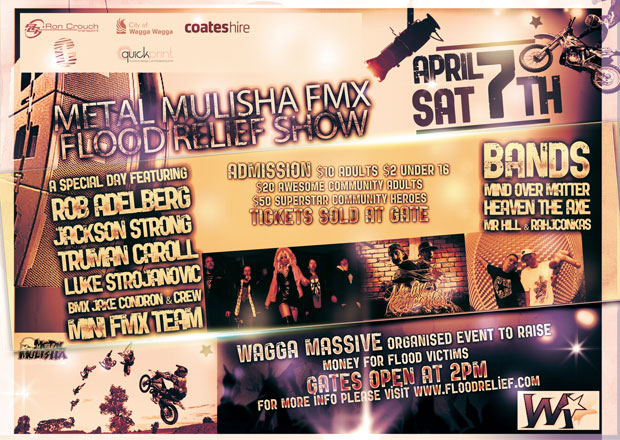 HEAVEN THE AXE organized a flood relief fundraiser in Wagga Wagga NSW Phoebe Pinnock and Steve Watts hometown. In record breaking proportions the flood devastated entire suburbs leaving many of the locals homeless and having lost all of their belongings. Teaming up with Phoebes brother Doug Pinnock, local hero in the flood preservation, they invited Australia’s Got Talent winners Justice Crew, a host of local and interstate bands and even performed as Rose Tattoo for Angry Anderson to sing, as well as performing their own set. Top international riders Jackson Strong, Truman Carroll and Rob Adelberg took time off international touring to put on a motorcross display like none other ever before seen in the RIverina region. With the help of the mayor, local business sponsorship, REX Airlines, Triple M, their close knit group of friends and the community the group raised $50,000 in one day inviting the town to participate for a low entry fee so lower income families could afford to attend and contribute to the cause. It is estimated that approximately 9000 people attended throughout the day.

“Once it was a dream of mine just to be in a band but now I am living my dream it is now my greatest pleasure to take my art and make a tangible and measurable difference to impact my world. That is the essence and definition of the term HEAVEN THE AXE” – Phoebe Pinnock