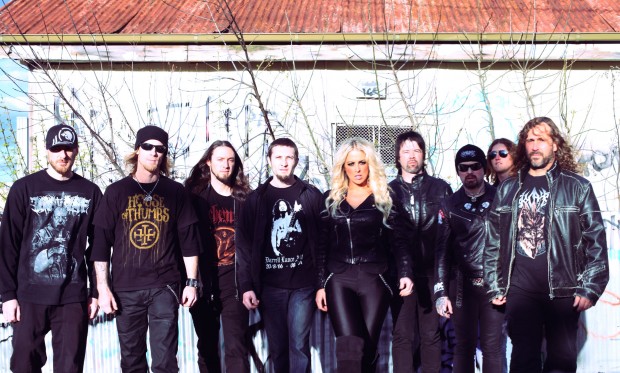 Without a song throws a spotlight on bands, albums and tracks beloved of Skin Back Alley.” Old, new, classic or cutting edge, our aim is to share good music that has touched us through the years”. CLICK HERE TO GO TO SKIN BACK ALLEY

Enough metal energy to power a sizeable township for a week; hooks so colossal they could catch a killer whale; a rock n’ roll flame firing so hot and heavy that it will wipe you out and leave nought but your shadow plastered to the nearest wall. Sometimes you look at a band, consider what they have going for them, and have no option but to be left mouth-agape wondering why on earth it is that they aren’t globe-conquering megastars.

Welcome to you, Heaven The Axe.

Hailing from Melbourne in sunny ‘Stralia, theirs is a blend of some serious hard-rock chops bolted on to a wall of monstrous heavy-metal. Frontwoman Phoebe Pinnock’s voice is an instrument of astonishing power and flexibility, and the musicians count amongst their number members and ex-members of such well known Aussie outfits as Manticore (guitarist Steve Watts), Damaged and The Berzerker. In other words, they boast serious musical pedigree.

Yes, yes, I hear you. Pedigree counts for nothing if the songs don’t live up to their billing. It’s a bloody good job that they do then, isn’t it. Heaven The Axe’s debut album Sex, Chugs & Rock N’ Roll is full to brimming with songs that contain enough aggression to make them metal, without sacrificing some stunning melodies along the way. These tracks are home to the kind of rhythmic hard-rock dynamism that will keep the tips of your toes and the hairs on the nape of your neck tingling long after your MP3 player of choice has run out of charge.

Album opener “Enemy” is a prime example of HTA’s puissant prowess; a fast moving balls-to-the- wall slug of sonic sagaciousness that punctures heart and mind like the proverbial piñata. It’s a blinding opening salvo and a real statement of intent. Likewise “Masochist” and “So Nirvana” impress with their fierce fret-hopping and gargantuan grooves. Not even the Greek Titans could conquer this mighty metal cohort.

Pinnock and the boys have some high-octane opportunities coming their way in the near future that will hopefully help to raise the band’s profile over and above their current following. March sees them play a set at India’s Hammersonic Jakarta International Metal Festival on a bill alongside metal and hardcore heavyweights like Lamb Of God and Ignite. Then just next week sees HTA perform in support of LA’s very own Butcher Babies as they head down under for a Sidewave show at Melbourne’s Cherry Bar. Bolstered by additional support from Kashmere Club, it promises to be one helluva show.

Of course television exposure can’t help but provide some much needed coverage for the cause, and Heaven The Axe’s theme tune to 7mate’s popular Aussie TV show Bogan Hunters is delivering just that. (No idea what a Bogan is? Google it, dude.)

So do your ears a favour and check out this diamond-hard, razor-sharp, needle-pointed band whilst they’re on the cusp of greatness, and don’t say we didn’t warn you. We’ve no doubt that this heavenly axe will very soon be swinging your way.

Thanks for the kind words Graeme Blackwell – @graemeSBA