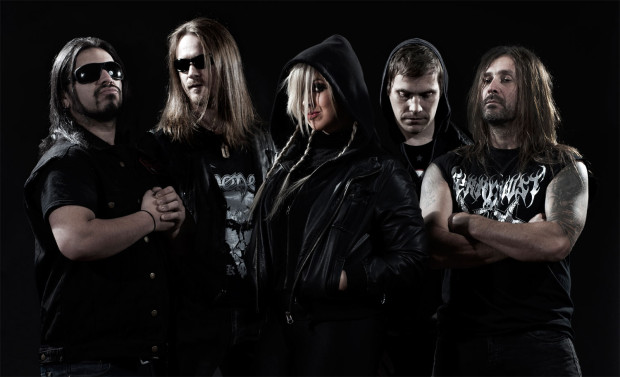 It is with ridiculous pleasure we are pleased to announce the official addition of Ed “Shreddie” Lacey.

So our fans can get to know him, and the kind of chemistry he brings to the jam room, here is an interview!

NAME: Ed LaceySTAR SIGN: The 13th Caldron of Hell. But seriously, it depends which of me you ask.BANDS: Alchemy (1994-1996), The Wolves (1996-2002), The Berzerker (1999-2009), Damaged (2000), Watchdog Discipline (2005-2007approx), King Parrot (2010-2012), Heaven the Axe (2014-current)INFLUENCES: Metallica, At The Gates, Kreator, Sepultura, Pantera, Morbid Angel, The Crown of Thorns (The Crown), Carcass, Deicide, Abremalin, The Haunted, Led Zeppelin, Pink Floyd, Dire Striates and Bobby McFerrin!BEGAN PLAYING GUITAR: Started at 9 years of age when I got my hands on an old rusty Maton Acoustic. I can’t remember the model however it had beautiful F holes in the body and an amazing antique look. Played terrible. It was great! I gave up a year later because it was too hard and I was the opposite of a natural. At 13 my father handed me a yellow Washburn KC40V electric and showed me three chords; E, G and A. After many months of swearing, spitting and throwing the guitar across the room, I came to the realisation that the only reason I was continuing to put myself through this torment was because for some stupid reason I was in love with it. Love and passion are terrible phenomenon. They will drag you kicking and screaming through endless pain and misery usually with very little to show for it at the end; other than to say you enjoyed every step of the way. Figure that out.TOP 5 ALBUMS (Which will change every month): 1. Wish you were here (Pink Floyd)2. Ride the lightning (Metallica)3. Slaughter of the soul (At The Gates)4. Cause for conflict (Kreator)5. Relentless (Bill Hicks)GREAT AUSSIE BANDS:• Karnivool• Crowded House• INXS• Missy Higgins• Silverchair• The Living End• Superjesus• Baby Animals KEY ELEMENTS FOR A SONG: True expression, passion, a little bit of pain, and the end result of which causes an emotional connection with myself and others.BEST LIVE CONCERT: I recall my first live concert was witnessing The Chocolate Starfish tear up Ararat (VIC) in 1994. This will always remain in my memory bank. I was 16, standing there in the middle of the dance floor (which was reasonably packed), staring at the band in a very similar way to which I stared at the first pair of breasts that were presented to me in the flesh; jaw slightly open, and a 30/10/60 division of disbelief, confusion and fear (respectively). At one point I relaxed enough to start banging my head, lost balance, and fell into the more experienced older metal-head gentleman in front of me. I remember him taking a swing at my pale soft innocent face, but thankfully missing. However, this was not the “best” concert, albeit coming close. I would have to ask Larry to lock in: Primus (Offshore 1995 or 1996?). Amazing. My feeble words will fall clearly short of doing that experience any justice. Lock it in Larry, lock it in you creepy smiling sinister-eyed “take me home to your daughter” dude… we can’t print that can we?MAIN CREATIVE DRIVE: Creation itself. Simple. Don’t care about gigs, don’t care about photos, lights, cameras, interviews, spit, vomit, blood….. just songwriting. Well, I suppose I care about gigs a little bit. I care if you care. INTERESTS: Stay in school and go to church.FAVOURITE BOOK: I have two. ‘American Psycho’ (Bret Ellis, 1991) and ‘How to be a complete D***hebag but still get laid’ (Justin Beiber, Ongoing interactive main-stream media publication).FAVOURITE PASTIME: Balancing a 2.5kg Yorkshire Terrier on my head while chasing a 4kg Chihuahua across the kitchen and up the stairs whilst my wife screams at me to stop. Oh, in the off-season I enjoy offering sacrificial lambs (or children) to Satan. Just kidding, just kidding… I don’t own any dogs.SPORT: Hahahahaha.WHY DID I JOIN HEAVEN THE AXE: Phoebe and Steve are incredibly good looking and they have excellent oral and subcutanean hygiene. Phoebe’s chick pea rissoles do taste like cardboard but it was actually my fault because it was a kiev for the blokes that was offered, which I refused. On top of that, Trav has amazing hair for a red head and Wolfman does an amazing rendition of Julie Andrews in that pretty red dress he keeps in his drum case for special occasions. Sometimes I’ll drive to see Wolfman in the night just to have him perform said rendition, and only then can I return home and get some sleep. Although, in saying that, last week I dropped over and he performed it after having shaved his face. Not the same. Let’s just say the hills were not alive.FAVOURITE INTERVIEW: Oh it’s got to be this one for sure. Thank you so much.