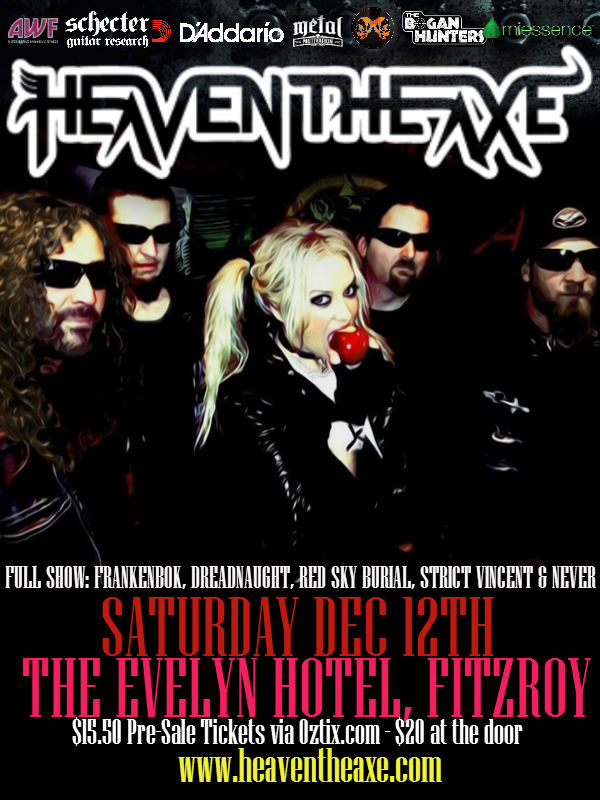 We had such a great time performing with Sebastian Bach at The Forum Theatre!
But now….We’re really pleased to announce we are playing a show in Melbourne at The Evelyn Hotel in Fitzroy on Saturday December 12.

This is not just any show – it’s a really personal one for the line up involved and you guys are all invited to party!! We really want you to come and be part of this event and get drunk with us!

Why is it so special?? Well here’s the story.

For some time now we’ve been really close with a few bands and we share a private studio with them called “The Lab” – if you have seen our clip for “Good Things Come To Those Who Hate” you’ve seen inside its evil innards….

Before we created Heaven The Axe we were huge fans of Frankenbok who are a cornerstone of underground Australian metal for quite a number of years. They and Dreadnaught were both signed to Roadrunner records when there was any big-deal labels running metal in this country. When Steve and I moved to Melbourne to create Heaven The Axe we called Tim Miedecke, bass in Frankenbok, and Steve said “G’day! Im Steve from Wagga, I just moved to Melbourne to make a band with me missus, how would you like to join our band”. Tim “was a bit too busy” to meet with us then but HEY…read on.

We were totally stoked to join with Frankenbok on a few tours and before you could say “How can a clam cram in a clean cream can” 50 times, we became great mates and that’s how we all joined up and created “The Lab” and also the Regional Roulette tour which also featured Dreadnaught, Abreact and King Parrot.

We had the same kind of passion and drive to create music and mutual respect and stupid humour….so its been a great time behind the scenes this year.

In early 2015, Heaven The Axe and Frankenbok both had members choose other paths in life, and because the remaining members just all had so much in common we decided to team up with Azza and Tim from the ‘Bok joining Heaven The Axe on guitar and bass and Steve joining Frankenbok along with their new singer Daniel from Scar The Surface.

Some of you will remember Aramis our old drummer – who was the drummer in Strict Vincent too – well he fell in love with the creator of one of our major sponsors (talk about getting into bed with a brand!) – Miessence organics; and after his mother died it was a fantastic thing for him to meet a totally awesome chick and he moved to QLD to live with her. Tommy came back into the fold after achieving some serious life goals and not only did he come back for more ‘Axe, he also took Aramis spot on drums in Strict Vincent too.

Skitzy is still part of the band but for now he lives interstate, so Tommy is the full time “meat gnome” (aka drummer) for Heaven The Axe.

Dan McDougall, previous singer in Frankenbok, handed the reigns of ‘Bok Vox to Dan from Scar The Surface and created a new band, Never, which he plays guitar in alongside Azza. As well as Ando (Dan McDougalls brother) from Dreadnaught on drums and Jason Richmond, singer of Red Sky Burial on Vocals.

So if you ever thought Australians were inbred you were right….you can see how inbred this all has become. I cant even..work this out. WHATEVSS…. Lets just rock!

In celebration of this show, we wanted to put on a massive show and invite all our friends to come party with us.

And we will definitely have new tunes to perform. The great thing about having so many dedicated experienced musicians involved is that we are able to get ahead so much more on new music, and that’s what we all love. So come and watch these guys bust their nuts. Azza will be performing in three bands on this night. Dude better carb up.

PRE-SALE TICKETS $15 or $20 at the door.
By buying a pre-sale ticket you go into the drawer to win a merch pack stuffed with s*** from all bands.