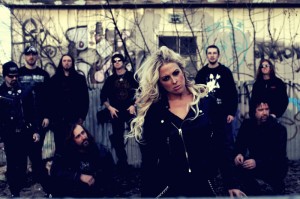 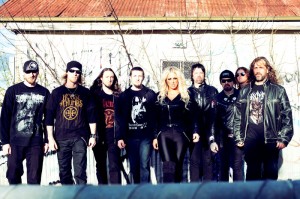 STIX ZADINIA – STEEL PANTHER
“This band [CENSORED] rocks!! Thank you for turning me onto Heaven The Axe. Killer riffage and def the hottest chick in rock.”

SLUDGE FACTORY – SANDI MARTIN:
“Gone are the days of Chrissy Amphlett and Joan Jett. Today we have Phoebe Pinnock”

DEEN CASTRONOVO – DRUMMER – JOURNEY, OZZY OSBOURNE, BAD ENGLISH, REVOLUTION SAINTS
“What I’ve heard of HTA is that the drummer is just sick!! Reminds me of Joey Jordison and Dave McClean…this band is bad a**!!… Its just a matter of time for this band to break, way too much heart my friends! So much respect for this band, and as people!!”

ANGRY ANDERSON – ROSE TATTOO
‎”Beauty and the beast. A beautiful blend of brutish masculine power tempered with sensual soulful sensitivity. Catchy carefully crafted lyrics driven by powerful rock rhythms give us a music that excites on every level”

DEEZER AUSTRALIA
“…simply off the hook, our number #1 metal pick of the year so far!”

UBER ROCK UK – MARK ASHBY:
“There’s one thing about Australians – and especially about Australian vocalists in rock bands: they’ve never really been what you would call backward about coming forward. Bon Scott (OK, yes, we know, he was Scottish by birth), Angry Anderson, Jimmy Barnes, Joel O’Keefe… they all have one thing in common: the first time you heard them sing, their larynxs jumped outta the speakers, grabbed you by the balls and made you LISTEN!

One other thing they all have in common: they were/are all male… the land of Oz hasn’t exactly had a reputation for producing female vocalists that produce the same sort of effect. Until now. Step forward Phoebe Pinnock, the leather underwear clad frontwoman with the rather unusually named Heaven The Axe – a woman possessed of the voice of an angel dragged through all seven levels of hell, all at the same time!”

BEAT MAGAZINE, AUSTRALIA – ROD WHITFIELD:
“Heaven the Axe could certainly be the next band to break out of the sluggish Australian heavy rock and metal scene and really make a name for themselves not only on the national, but global scene. Featuring some of the absolute cream of the Aussie heavy music scene, such as former members of Damaged, Manticore, The Berzerker, The Amenta and many more, the band is also fronted by the very outspoken firebrand of a lead singer Phoebe Pinnock, who makes many other female rock singers seem like shrinking violets. It’s a very loud and heady mix, and with their debut album Sex, Chugs and Rock ‘n’ Roll set to drop, these guys (and gal!) are primed to make a massive noise in rock scene”

“This band is an intoxicating mix. Take a hot blonde lead singer, surround her with big ugly blokes who just happen to be some of the best heavy music instrumentalists in the country, throw in a bunch of supercharged hard rock to metal tunes and you have the beast that is Heaven the Axe.”

THE METAL FORGE
‎”They seem poised to take the country and even the world by storm in the coming years.”

BENEATH THE GRID MUSIC USA – MARK KILMER
“Yet another reason everyone needs to pay attention to Australia’s music scene. Heaven the Axe whips up a cd worthy of worldwide recognition”

BITCHSLAP MAGAZINE US
“The Australian band could be the find of the year!”

METAL HAMMER MAGAZINE/TOTAL ROCK RADIO UK – MALCOLM DOME
“A band who’s name says it all. The Heavenly sound of melody, with the Axe attack of real power. They’ve got the gritty attitude we’ve come to expect from all Aussie bands, but definitely have their own edge.”

CACK BLABBATH UK  – IAIN
“Bands have about 30 seconds to create enough of an impression to make the rest of the release worth listening to….Which is about 20 seconds more than Heaven The Axe needed.”

“One of the hottest talents in Australia today – I’m a huge fan.”

“The Australian band could be the find of the year!”

“A band who’s name says it all. The Heavenly sound of melody, with the Axe attack of real power. They’ve got the gritty attitude we’ve come to expect from all Aussie bands, but definitely have their own edge.”