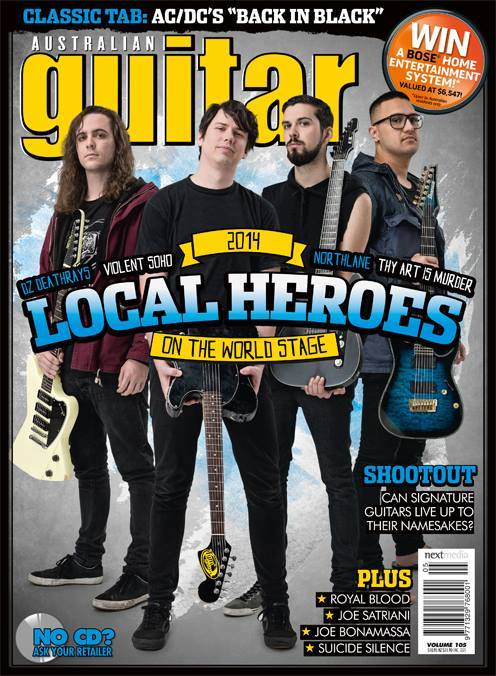 Usually found playing:
METAAAALL!!! \m/ As hard as I’ve tried to diversify and get cultured I’m only really interested in two styles of music….. Heavy and metal (and yet here I am happy as Larry in a rock band). It’s kind of a conundrum really. Most rock people seem to think HTA is metal but anyone who’s serious about the subject knows we’re not. It’s just rock n roll played by metalheads. When I think of metal it’s Napalm Death and Aborted all the way. Genres eh. My friends tease me about my musical tunnel vision all the time. I guess that’s pretty much me in a nutshell though. Full on or not on.

Years on the fretboard:
I’ve been obsessed with music for as long as I can remember breathing and fascinated with guitar from a very early age. I was a left handed kid on a farm with copious amounts of gum leaves hanging out of my ears and never actually got the chance to have a crack at it until I was about 12. Mate I was so green that I didn’t even know people could play left handed and so playing guitar became the only thing I do right handed (besides throwing bricks. You quickly learn to become ambidextrous at that). No one was into guitar, let alone metal in my hometown (Wagga Wagga) when I was growing up. I felt like a freak and never actually got to play in a real band until I was in my early twenties, where I hooked up with a drummer who had been playing for 3 months, a guitarist who knew a couple of Metallica riffs and a bassist who moved there from Newcastle. We called ourselves Manticore and we kicked arse. Every time we played we pushed ourselves to our absolute limits and it was there I developed my style of writing I guess. That band was a dream come true for all of us. Once we had burned ourselves out at the end of last millennium I started playing acoustic guitar. It was also when I got the idea of forming a riff driven rock band with a female singer after seeing Grinspoon perform in the late 90s. In 2000 I hooked up with Phoebe (HTA singer) and we began our music and life journey that to say I’m proud of is an understatement.

How would you describe your playing style?
Haha! Wrong would be the best way to describe it! When I was in Terrorust our other guitarist Fanza said to me, “I don’t understand your style. It seems to be a lot of effort for no real gain.” That pretty much sums it up. Terrorust was extremely brutal death/grind and all the parts were written when I joined. I’d be bustin’ my arse playing their stuff and I’d look over to see Fanza hadn’t even broken into a sweat. It was definitely much heavier with me in it though. I’d get so locked in with Skitzy (drummer) and it was high fives all around at the end of every song. That band definitely helped me get my chops back up. I broke my left hand quite badly as an angst ridden teenager and don’t have much independent movement in my third and fourth fingers. I remember the quack saying, “Well mate, I hope you’re not a piano player.” I said, “I play guitar.” He said, “You used to.” I went straight home and started playing with the bandage on. It doesn’t hamstring me too much for what I generally try and do I but can frustrate me at times when I get my ambitions mixed up with my capabilities. I have a very aggressive and tight right though. I pretty much use my whole arm (hence the lot of effort/no gain comment). It does give me a lot of attack in my rhythms but wasn’t an intentional thing. I just get really passionate and carried away. The years I spent thrashing out on the acoustic with Phoebz in the Wagga pubs also helped my rhythm playing immensely. When I finally picked up the axe again for HTA I found I had this cool hybrid thing going. It took a while to adjust to playing electric guitar again. Mainly how to sonically allow room for other instruments, as to me trying to compensate for them not being there, but once I did I was away. Well that, and try to not hit the b*****d so hard. 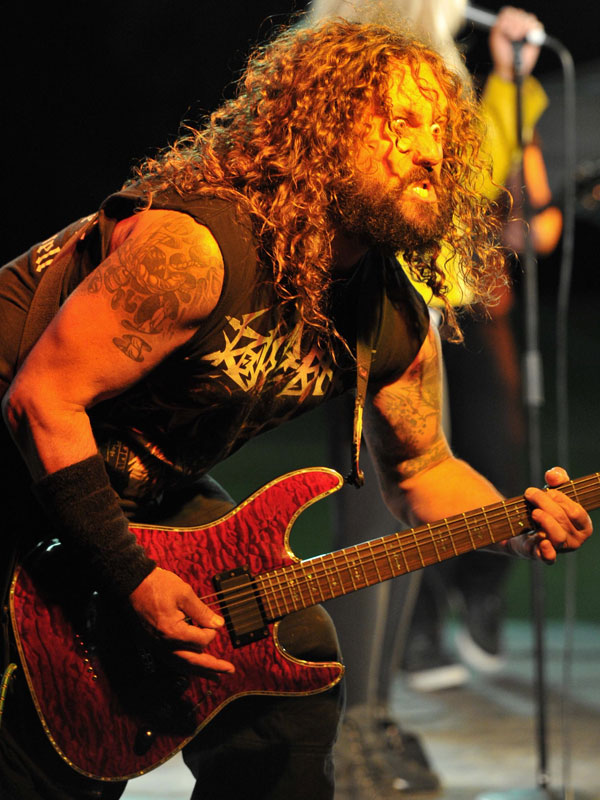 First axe:
Vantage Les Paul (Ace Frehley was God to me back then)

Current axe:
Schecter Hellraiser and ESP Horizon are the only guitars I own. We took the volume pot out of the ESP because I kept hitting it all the time which makes it only really useful for songs that are crankin’ all the way through, so the schecter is my fav to play. It’s perfect for me. The ESP was a gift so it has a lot of sentimental value and I do find it cool to play. We’ve whacked EMG 81s in both of them. Sometimes I’m lucky enough to get to play my mate Jimi’s Flying V (or Valerie as he affectionately calls her). I feel like a real badarse using that onstage but my abusive style combined with my corrosive sweat…….well let’s just say it was hard for him to bear witness to night after night. Though he did bring it to our “Good Things Come To Those Who Hate” videoclip shoot for one last hurrah. I was stoked. Onya Jimi!

Rig/pedals:
I’m not a gadget kinda bloke. Live I pretty much just run straight through a decimator into my mesa dual rectifier roadster. It has four channels. 2 clean and two dirty so I do all my switching there. On our album I used a Krankenstein. It sounded so rad it was ridiculous. I’ve also used an old school 5150 and a Sherlock Fathead in the studio and have been happy with the results.

Secret weapon:
My right hand works a treat. To be honest, I think the fact that I’m so animated in my playing kind of might make some people think I’m more capable than I actually am. There are so many players around, especially these days, who are simply jawdropping and remain relatively unheard of. I mean just today I saw a 10 year old girl playing War Ensemble by Slayer including solos. She was all over it! For me it has always just been about the song. I do get a lot of good feedback about my attention to detail in song structuring and riffage but I’m pretty much just a fanboy. I like to write songs that if you walk into a venue and hear us going off you would want to stay. I would.

Favourite guitarist of all time:
That’s a toughy: Right now….. I’m a massive fan of Dave Davidson of Revocation. He’s a lot of fun to listen to. It’s great to see him starting to get a lot of recognition. Mitch Harris, James Hetfield, Malcom Young, Mick Thompson and of course Ace would be my greatest influences.

Favourite current local player:
Even tougher: Richie Poate of Dreadnaught is such a champion and his playing is seriously worth checking out. We were fortunate enough to have him in to do some guest solos for HTA on Good Things and the Bogan Hunters theme song. Also you just have to check out The Stanley Knife from Dead Kelly. Holysnappinturtles!

Many thanks to Bianka and all at Aus Guitar Mag!
Like them on Facebook: Australian Guitar Magazine