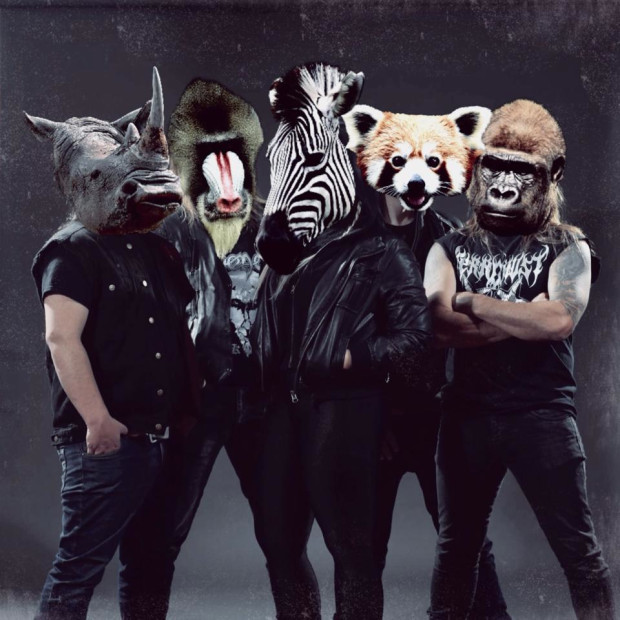 Real shortly, we cant wait to introduce you to a new beginning for Heaven The Axe. For now, Ill sit this pic of our new band here…right here on this digital mantle piece…. animals for music, wild for the dream, surfing every moment and taking in the journey. This is far more than a band, this is our life, and we love every moment. I wonder if you can guess who the new blood joining us is?

Personal Update: from Me (Phoebe – Singer).

Welcome to our page for those that have just joined us. Did you all see the new Bogan Hunters video clip? Stoked if you have just discovered us and joined us here! So if we were having a coffee and a chat and you asked me about the band, this is pretty much the conversation you’d get on my side, but I’d probably make waving hand gestures, get overexcited when talking about our new guitarist (yay) and put a few choice words in for my own amusement.

I really wanted to give you an update on whats been happening behind the scenes of the new “Axe Treehouse” since we moved from the “Axe Mansion” where most of us lived and jammed together for the last few years and guess what… we literally brought the roof down….we shook the foundations of that house at its core…double brick and all…it was demolished after we left! Three drummers might be to blame yeah? HAHA ….oops! That was a special place…and it was symbolic really, and after a few months of navigating through tidal waves and seas of change a new era is here. I thought it was just as important to share with you all the challenges we encounter as well as the victories. We are so grateful for all of you who connect and encourage us, despite us doing this even if no one is watching.

Our last live show was Street Machines Summernats Festival, Canberra, in January. For the last few years we have never even thought to take a break from live shows, other than “In six months time I’m the best man at a wedding so don’t book a show on that day!” Its been really valuable to retreat and having the time to think about other things in the realm of being humans and remember who you truly are and why you do this crazy thing in the first place. Being in a band is so much more than playing music.

Having some time to refocus has been kinda alien but also cool…I just planted a vegie garden the other night at the eclipse in Taurus ..my first one. Its right outside the door of our new jam room. I wonder if the seedlings will shriek in horror and shrivel…you know those pics of water that have been treated to heavy metal music and the molecules are all whacked out and evil looking?! I’m gonna try to prove that the heavy metal sounds that come out of our jam room are truly healing, as I know they are to me. Cos thats what I get when I sing them. Whether a song be like a metaphorical totem pole that defines and expresses your invisible rage, or a collection of words that acts like an energy boost and reassures you and makes you validated!

Singing isn’t just “singing” to me…I know how to sing using my instrument, I don’t have to think about it other than observe the conditions of my body. I have to emotionally “go there” and feel it and let the song take over my being. Its a full-on metaphysical experience where I release stored up stagnant energy from my core with the energy that is released from my heart chakra through my throat chakra. Often Ill sing a song I’ve written about someone elses pain and end up in tears, from truly embodying their situation to perform the song. From anger, to despondency and political protest to blatant primal animal lust to unconditional love – its all defined in a feeling that manifests itself physically and can be released energetically though music. Even if the words make no clear sense, you just know what its about to you. If you’ve ever got goosebumps from listening to a singer then you know what I’m talking about…

“Good Things Come To Those Who Hate” was such a HUGE moment for me in harnessing and validating my anger positively. I used to assume that song was negative, but when I was able to express my rage through that song as an outlet it was immensely empowering. It was a bonus that others also took that energy on for themselves so powerfully too.

My Top 5 Albums right now:
1. Mustang – Hotmanvenom
2. Steel Panther – All You Can Eat
3. Thornley – Come Again
2. Danko Jones – Rock and Roll is Black and Blue
3. Grace Potter and The Nocturnals – The Lion The Beast and the Beat

After “Good Things Come To Those Who Hate” came out our world starting collapsing at the Axe Mansion. These things came through as shocking as if Miley Cyrus herself swung naked on a wrecking ball through our jam room:
*Trav – bassist: he nearly died suddenly and had major surgery after his lung collapsed…Thankfully he is safe and well and his life is much more brighter and healthier. Apparently tall and skinny guys lungs collapse very commonly. So glad ya pulled thru buddy.
*Mat – guitar – number 2!: (We tease him…haha) Matty had some major life circumstances which took his whole focus to come through with strength and he is powering through.
*Aramis – drummer: fell madly in love with a stunning superwoman world un-f*&#$r who lives in QLD…..If you ever see us post about Miessence – Natural & Organic Products – shes the genius rockstar goddess that creates it all. The visionary. We cant compete with her inspiring legend status and did I say she lives in QLD? Yup. QLD. Done his nuts. And you cant be upset with a bloke about that.
*Tommy – “meat-gnome” drummer: (we have been working with three drummers before Wolfman to let you know if you’re new, hence the pics with 9 members… more on that later…PS: I think most of you know about the legend that is the Wolfman? He came on board as our new drummer just before the show we did with Chris Jericco’s band Fozzy in December…WHAT A DUDE!) So Tommy got a promotion at his work, being the clever little mind ninja he is, making jamming and shows almost impossible with HTA for where his life was heading at this point.
*Skitz – drummer and pet human: was off to tour the U$A playing for King Parrot. For like, months. Prior to this his life had become fully as the drummer in that band, but we always will jam and write with Skitz, who is the original drummer of Heaven The Axe and part of our everyday core clan.
*Steve – Guitar Number 1!!!! The Axe: had a major injury and trying to balance everything in that much pain was a challenge…but Steve is a rare warrior and the entire band. Hes the driving force and the the reason any of this exists. His hard work and talent for creating the music blows my mind. He is irreplaceable.
And Jimi – guitar tech/roadie/Exodus monk/band guardian angel: We tricked Jimi into taking us for a drive in the country yesterday so we could sing him our new songs on the acoustic while we drove and he had to listen and couldn’t go anywhere! Need an audience? Kidnap one.

But we are all out the other side of the April/May eclipses and grand cardinal cross and great fracturing (….google my friend)….Welcome to the real life spinal tap… Astrology is how I make sense of the world and it works for me always. Ive been studying it for 16 years when it became apparent that its an intuitive tool that speaks my non verbal language. This is a phenomena in my life of great significance.
While the universe was creating this chaos and I’m thinking what can I do? Being that we know ourselves to be problem solvers…But this was a fair whack of unreasonable chaos and the planets help me to navigate and create order and trust in the flow of life.

So where to from here?
Steve and I have been working on it every day since Summernats sticking to the plan for our love of music and our love of our band family, no matter how removed they become from actually playing in the band. Cos there’s a whole lot more to us than this pretty website and a couple of songs.  And when you commit to something and/or someone, really and truly and follow your heart because you truly love it/them, it all comes together and sometimes resolves out of nowhere yeah? Has this happened to you? That’s why I thought Id share a bit more about us…we don’t know many other bands like us. In fact some other bands tell us “that is not how you do it” whatever it is. We thought metal was about NOT following the rules. And isnt this art? And if taking time away from it all has taught us anything, its to be ourselves and trust our gut and always just pick up the guitar.

As the universe would have it, there were some pretty damn talented new band family members also tuning into finding exactly what we had to offer…and in February we filled the gap.

Since then we got real busy getting to know each other and getting the past music down, we could play shows if we wanted to…but we stopped and thought, man! We are gonna take a step out of the stage lighting set up and write and re-create exactly who and what we are together in this unit…and that’s what we have been doing, in the jam room with us band ninjas.

Steve and I have written hundreds of songs, we begin with a song on the acoustic guitar, and nothing makes me happier than getting these down with the full band in the Axe Treehouse. And goddammit, those vegies I’m growing outside the door are gonna be vibrating with the energy of the words of the new songs. That kind of stuff makes me ridiculously high on life. The simple things are so profound.

Stay tuned for an announcement on the new line up.

Thank you for joining us! X Phoebe